Day 3, ahh the most stressful day of them all. We were up and at Mcdonalds again for breakfast round 2. This time we avoided the sandwich all together and ordered the “big breakfast” which was basically the makings of a sandwich but with scrambled eggs and a hash brown. No ketch up in site and a little more food although it cost more than twice what the previous day had cost. We stopped at a store for some snacks and then checked out of our hotel and headed for the metro. Getting to the train station was relatively painless but once there… we were a bit lost.
We wandered to 3 different corners of it looking at the giant screens for our train number. The easiest way to think of it is like an airport and you have to look for your gate. Once you find your waiting room/”gate” you wait until about 30 minutes before departure when you “check in” and queue to go out to the platform. Once we managed to find our actual room and go through security, it was pretty easy and locating our seats was a cinch as well. We were at the front of a cabin which was nice for leg room, but bad as we hardly had any window. 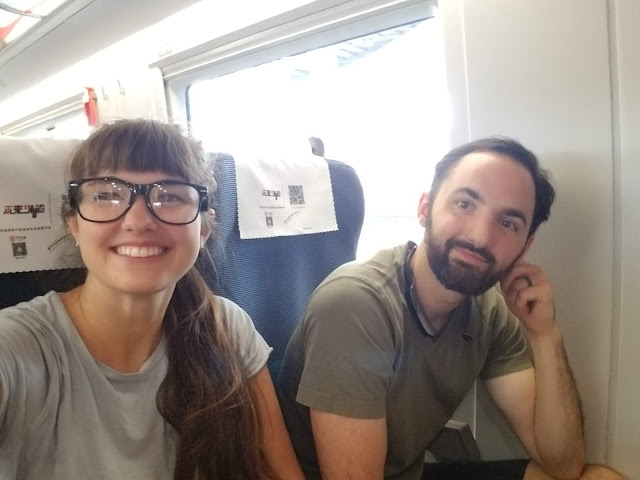 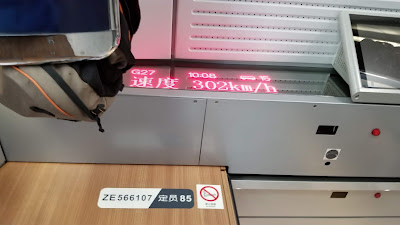 The train ride took 5.5 hours with a few stops but overall the train traveled at 300 km/hour or 187 mph. I mostly read my book, played with my camera, and people watched to pass the time. Once we arrived at our destination, HuangshanBei (north) we got off like normal and started looking for the bus to the scenic area Tangkou (which is the town right before entering the park’s gate) There were NO signs at all in English besides a “welcome to Huangshan” and tourist information sign. We found what looked like the bus area and translated signs that appeared to say “scenic area” but went to the information center to verify. Well they spoke no English either and just sort of pointed in that direction when we asked for Tangkou. So we went back out there and boarded the first bus that pulled up. I asked the driver “Tangkou?” but he was distracted and I don’t think he understood what I was really asking but he nodded so we paid him and found our seats. 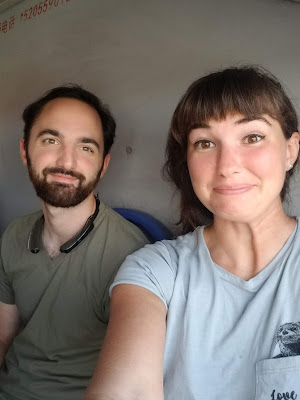 Selfie on the mysterious bus not sure where we were going….
WELL I should’ve been suspicious when the fare was only 2 rmb/ person but as we watched our progress on google maps it became apparent after 30 minutes and turning the wrong direction onto the main highway that we were headed into Huangshan town instead of North to the scenic area. We waited until we were close to the main train station in town (thinking there would be buses from there), to get off with a short 10 minute walk from the stop we got off at. Well, it was SO hot and while it wasn’t a long walk, by the time we got to the train station I had already sweat buckets. The station was fairly deserted with no buses but had a sign in English at least that said “to Scenic area”. After no buses came for a while we walked into the station to ask about it where a little old woman told us (in chinese) repeatedly “tomorrow” (as we LATER found out) and lead us to her backwater hotel behind the station. I had a feeling that she was trying to talk us into staying the night there but hadn’t realized yet that she had meant there would be NO BUSES until tomorrow! Once we used a translator and found that out we wandered back out front of the train station and hope started to disappear, replaced by pure frustration. HOW WERE WE SUPPOSED TO GET TO OUR HOTEL? At this point we wanted to take a taxi but had no idea how to call for one (their uber is DIDI and is only in Chinese)
Thankfully a taxi driver stopped to drop people off at the station and we asked if he could take us which he could! Hurrah and he had a wonderfully air-conditioned car to take us there in. Driving to Tangkou took just around an hour and it was much cooler and rainier up at the town. We tipped our driver 20 RMB on top of the 200 fare because really.. he saved the day and after only an extra 1.5 hours of being lost in Huangshan and another 1 hour taxi ride, we made it to our destination! 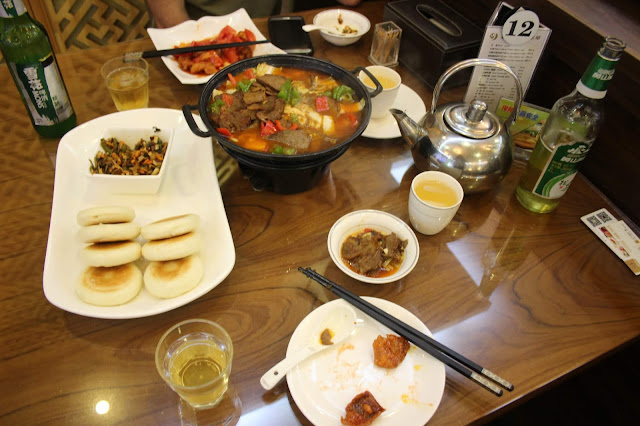 Check in was a breeze and our hotel for the night was really lovely. We both took quick showers and changed before heading down to look for food. The restaurant looked pretty good so we decided to just eat there and boy we were glad we did. This was hands down the best meal of our entire trip. Braden got a sweet & sour pork and I ordered a more regional beef stew as well as a sort of appetizer bread that comes with a stuffing. Our meal started with a traditional green tea (we didn’t order it, they just bring it to you first before you order any drinks or food) And then it all pretty much came at once. Braden’s pork was fantastic! Perfect taste, texture, everything. And my stew was right about there as well! We also finally started to make a little progress with our chop sticks so that wasn’t as painful. Overall, we ate until we were completely stuffed and then headed out. I stopped at reception as the front desk girl said she would give us some tips for the mountain. 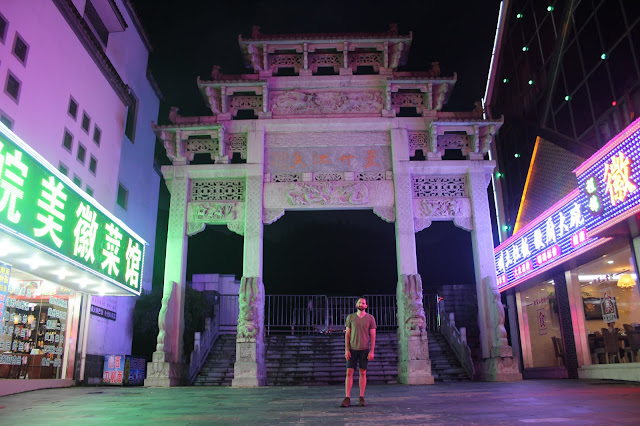 WELL she straight up pulled out a tourist map, circled the hotel I said we’d be staying at, and then proceeded to walk me through a complete 2 day itinerary complete with 2 colored markers for day 1 vs day 2, prices and hours for the cable cars, expected hiking times, and points of interest. Her English was very good and while I had done a LOT of research before-hand I learned from her that one of the trails I had planned to do down was actually closed part way! So it was definitely helpful and we used that map non-stop.
Then we headed out to walk around the town a little which was cute with neon lights everywhere and lots of shops. We bought some snickers and souvenirs in one of the stores and then headed back to our room for the night. 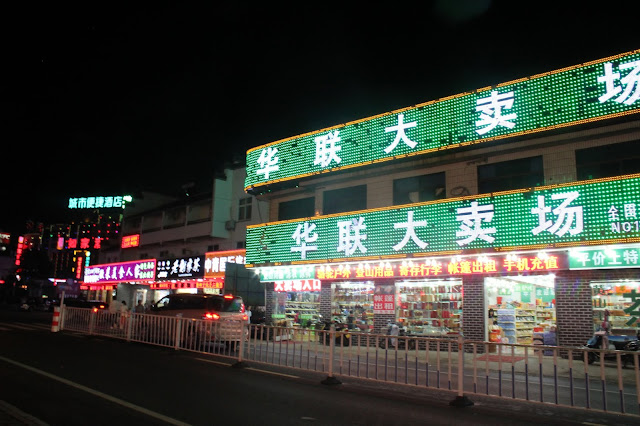 NEON everywhere! This was across the street from our hotel where we bought some food and souvenirs. 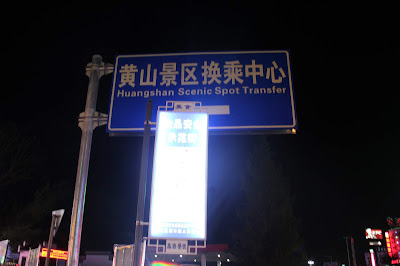 Sign in front of our hotel that is where the CORRECT bus drops you off and where you connect to the scenic shuttle bus service. 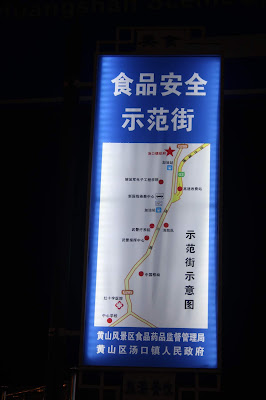 This map is important as it shows all the stops the scenic bus will take on the way back.. Should’ve pulled this up on our way back as we totally got off at the like 2nd stop. *face palm* More on that later…
In our room it was the most comfortable of the trip, super clean, and while we didn’t have a bath tub (just a shower) they did provide a foot soaking tub complete with a green tea foot soak that was wonderful after the walking and traveling we’d done.
So all in all, what was a pretty stressful travel day ended in our favorite hotel of the trip and by far the most delicious meal we had. Read the next post for our epic Huangshan hiking days!
Day 3 costs:
Breakfast $7.29
Store $5.83
Metro to train station $1.17
High Speed train (2nd class seats): $181
Taxi $32
Dinner $23.32
Store (souvenirs) $12.39
Hotel: Cheng Jin Hotel $33
Day 3 Total: $296