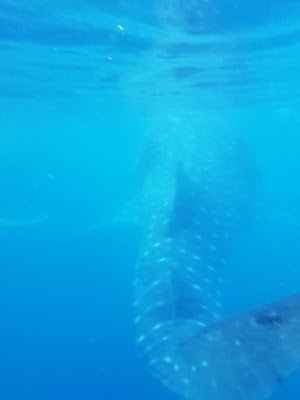 Whale Sharks- Did you need another reason to visit the Philippines?
While there are numerous boating spots around the islands to spot or possibly swim with whale sharks, the most accessible and reliable is definitely Oslob on the island of Cebu. Here the whale shark tours operate 363 days of the year, are incredibly affordable, and you can “count” on seeing them. The reason why? Unlike other whale shark sighting spots, the tours in Oslob feed the whale sharks.
Ethically is this ok? Good question and it’s one I read up about a lot in preparation of my visit. As with all animal tourism activities, it’s always a good idea to read up on and decide if the activity you want to participate in is ecologically ethical. Feeding the whale sharks does create potential dependency, over socializes the whales with humans, and diverts them from what used to be set migratory habits. What I took comfort in was knowing that the tours here had VERY strict rules on not touching or swimming too close to the sharks, reportedly has marine scientists studying and keeping an eye on the sharks in the area, and that the sharks are wild and FREE to roam where they may. No cages, holding tanks, nets, notta! More on that later….. 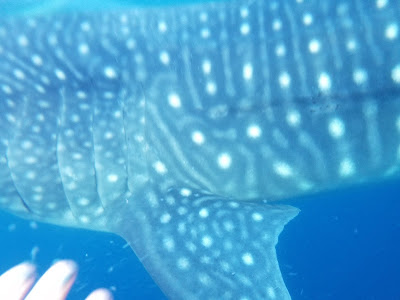 My hand sneaking into the photo to show just how CLOSE I was to the sharks
(Don’t worry my hand snuck into the photo only because I was frantically trying to swim further away from it, not trying to touch it)
So would I recommend this tour? YES! If you have it on your bucketlist to see or swim with whale sharks I would as long as the rules and regulations don’t change. SO more on our experience… 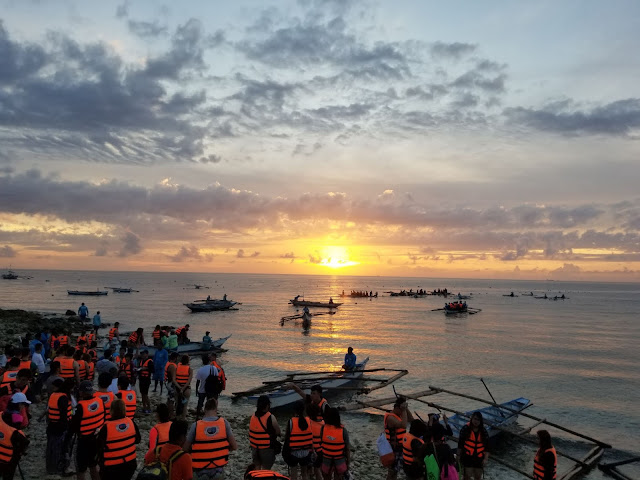 We were one of the first groups but there were already LOADS of people waiting to be canoed out to the swimming area.
We had heard that the best time was as soon as it opens to see the sharks and with less crowds. The tours are all a flat rate of 1,000 pisos (no matter who you book it through) but you will see extra costs based on transportation. We were about 8.5 km at our resort from the whale shark watching area and we paid 1175 pisos/ person. We potentially could have paid a trike driver less to get us there but as we wanted to get there EARLY, we didn’t want to stress about it so we just booked it through our resort. Which turned out to be great! Not only were we picked up promptly at 5:30 (without sighting any other drivers on the road… so flagging a cheaper trike would’ve been a challenge) but our driver also had pre-purchased our tickets for us so when we got there and saw the horrendous line already at opening, we got to skip right through to the information debriefing and selecting our snorkels with only a 20 minute wait before we were out on the water. 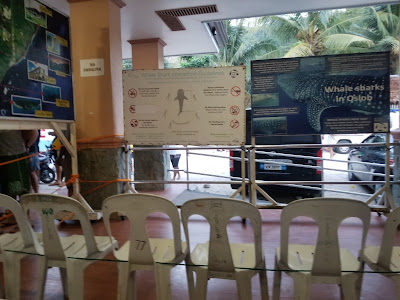 The safety and RULES debriefing area

I definitely found the extra 125 pisos worth it for this luxury and our driver/ tour guide (?) was very helpful in telling us where to go where we probably would’ve been a little lost other wise. 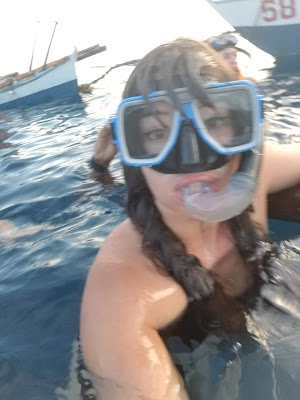 Goofy snorkel photo… Recommend bringing your own 😛
After selecting your snorkel (if you pay for the swimming option) you wait for your number to be called and then you go to assigned canoe. About 10 people fit in pretty small canoes and you have to sit 2 people to seat, but not to worry! It’s a very short ride out to where the water is deeper. We were maybe the 10th boat out and we hooked to the line. At this point your 30 minutes start, you can take off your life jacket, and hop right in! 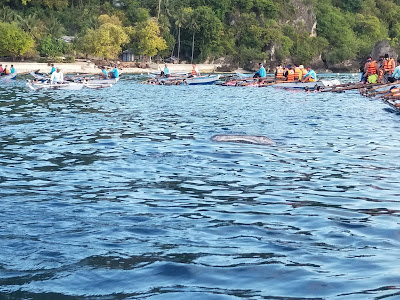 See the whale shark swimming toward us with his mouth open?

All of the boats assemble in a semi circle while the canoes with the feeders are on the inside. They slowly move in front of all the boats dropping fish so that the sharks tail along and everyone gets to see them! They do feed them PRETTY CLOSE to you so there were multiple times the sharks large body or tail would get REALLY close to us and we had to get out of the way but it was also insanely cool to see them get that close. The semi circle setup also created pretty cool scenarios in that the sharks would swim in and out of the area to eat UNDER you… Twice we would be watching the shark they were feeding in front of us and would look down to see one swim RIGHT under our feet. (Thus try your best NOT to kick a lot when treading water and always be aware of what’s under you)

All in all the experience was AMAZING, and my only regret was not having a go pro as I battled with my phone in one of those water proof sleeves almost the entire time. (so I got next to no great photos with only 1 decent video) Too soon they were calling us back into the boat and we were headed back to shore. There they have showers to rinse the salt water (and potentially fish guts from the sharks eating) off before we caught our ride back to the resort.
For a longer video of swimming with the whale sharks, go here: 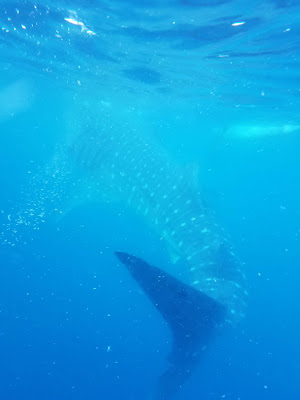 I was pretty devastated to not get that many cool photos but regardless of the documentation, it was still one of the most incredible swimming experiences I’ve had.

We had almost all day left to relax and explore Oslob! So for lunch we walked into town and tried the “fancy” restaurant our driver from the previous day had recommended. The food was good but let’s be honest, the pork was literally the same as the street food at twice the cost. The watermelon shake I had on the other hand was amazing. Then we spent some more time sitting in the sun pool side and hanging out around our waterfront resort. 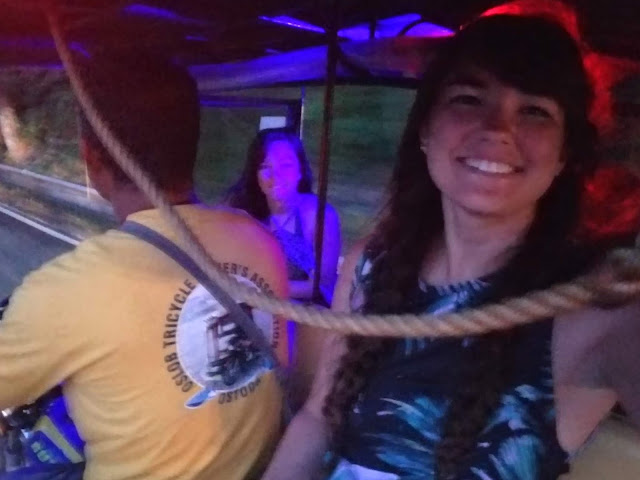 Riding side saddle behind the driver on the motorcycle while Tippe road with another couple in the side car of the trike. 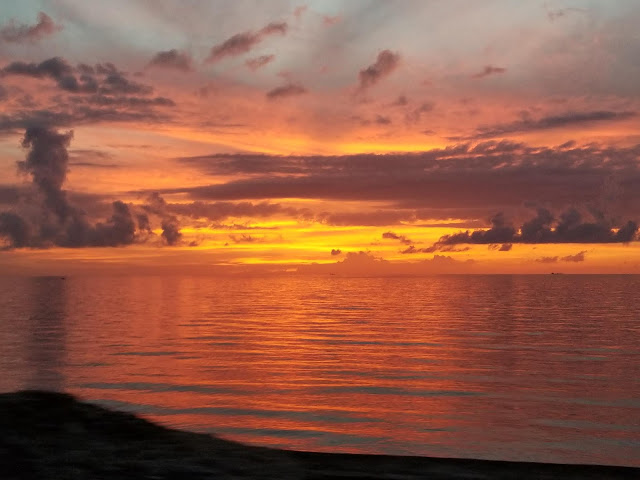 The MOST incredible sun rise I have ever seen in my life that we watched from the trike as we drove to the Whale shark experience. I seriously didn’t filter or edit these photos in any way. 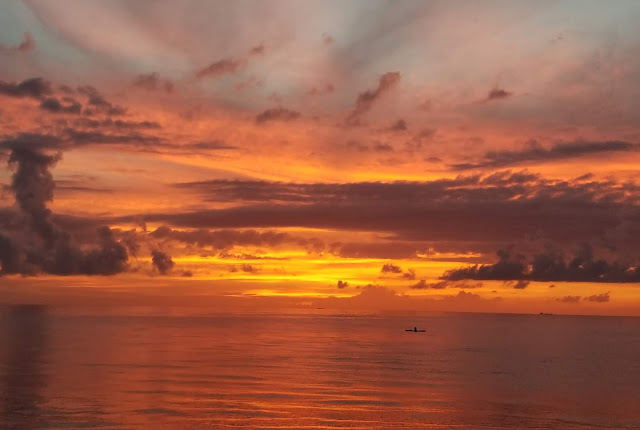 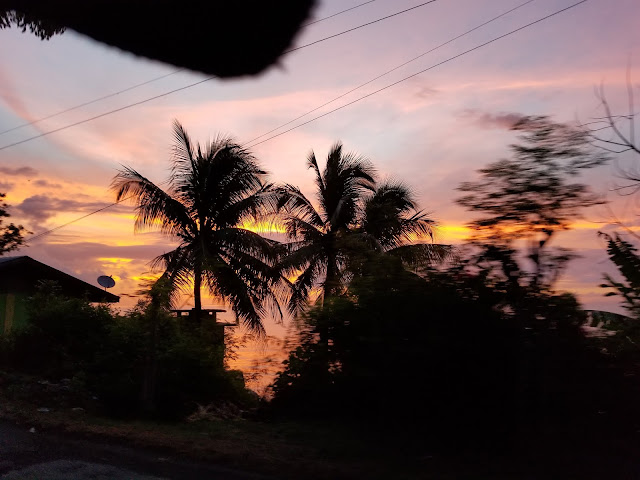 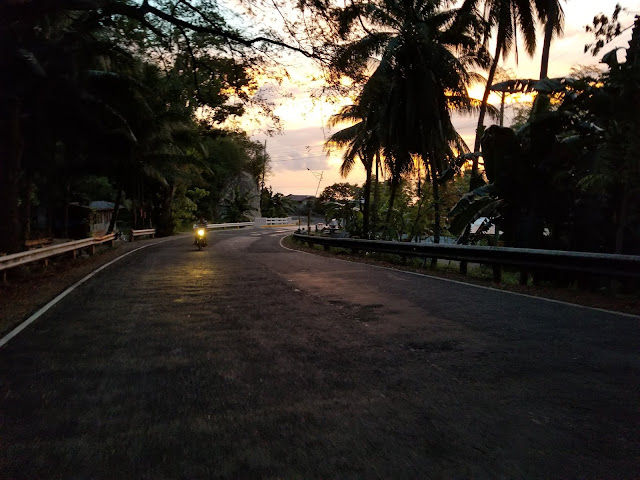 The road is definitely much emptier at 5:30. 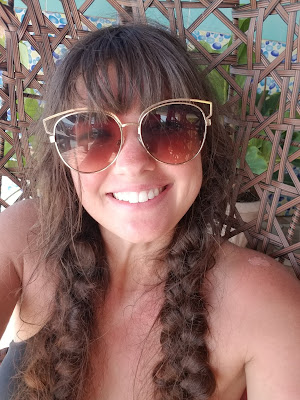 Back at the resort lounging in a hammock chair 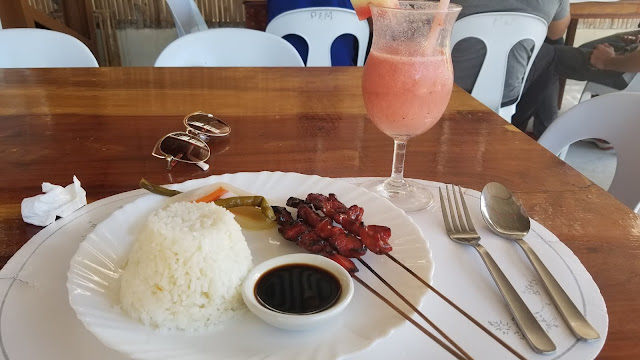 Lunch at the “fancy” restaurant. I will say the watermelon smoothie was crazy good. 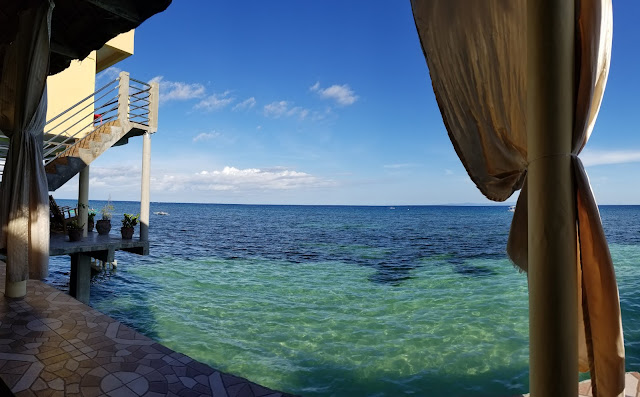 Most of my afternoon spent sitting in a hammock chair with my book gazing out at the water
Once it started to cool down in the evening, we walked to the city center of Oslob to see the historic church and fort. We happened upon the public square first, complete with political statue, pineapple fountain, public offices, and giant church not far off. We headed toward the church to check it out. 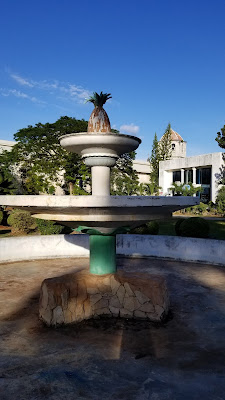 Pineapple fountain with the church dome behind it 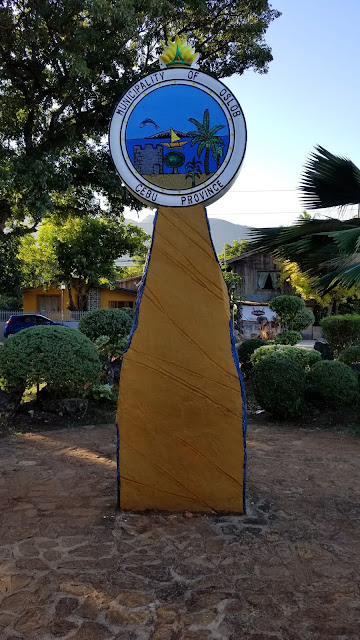 Our Lady of the Immaculate Conception Church

Oslob first became an independent parish in 1838 which them lead to the present- day construction of an incredible church as patroness. It was built out of cut coral stone and was started in 1830 – finished 18 years later. The buttresses were added between 1848 and 1850 and may favorite part, the adjacent bell tower was built in 1858. The church was burned down during the Second World War liberating Philippine Commonwealth troops and Cebuano guerillas against the Japanese in Oslob in 1945 but was eventually restored. 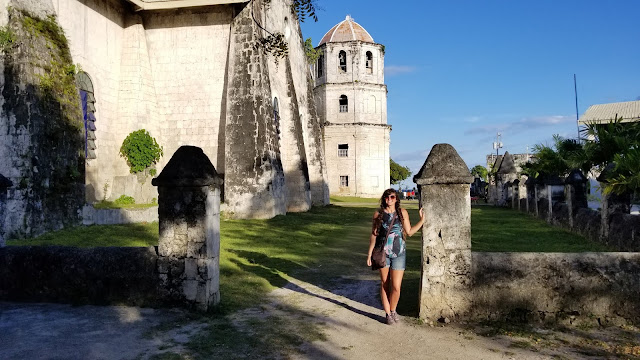 Walking around the church grounds 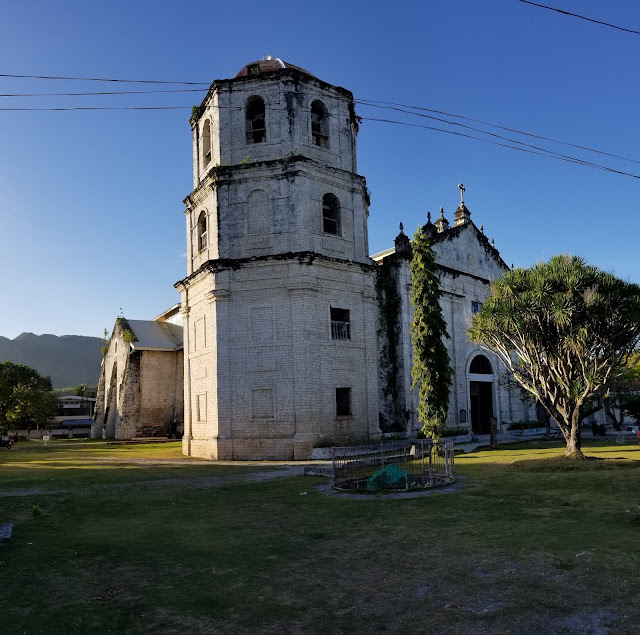 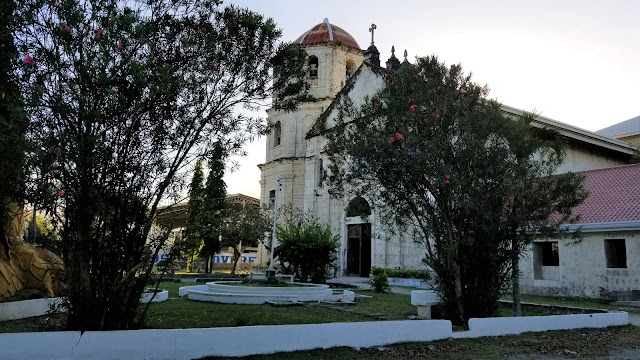 While we were walking around the church it was during evening mass and there was a lot of singing and music coming out of the church which was wonderful to hear though we were a bit sad to not go in. We mostly checked out the beautiful architecture and some of the fun signage they had around including one that indicated the street the church is located on is the oldest one in Oslob: Calle Aragones which was built in 1878. This street also leads you into Oslob’s heritage park where you will find the next two points of interest: 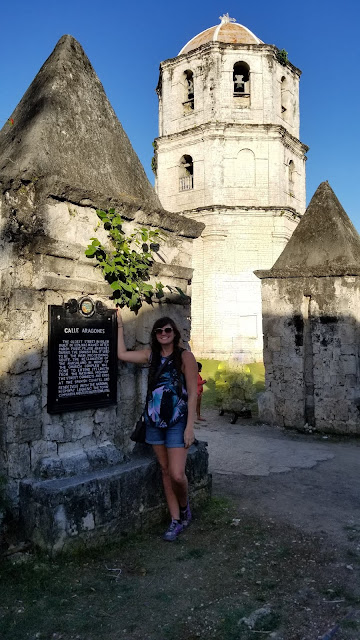 The Spanish Cuartel ruins
Located right in front of the church stands an unfinished building made of coral blocks resembling a Spanish-era barracks. This was intended to be the “cuartel”, barracks for Spanish soldiers. It was started about 1860, but remained unfinished at the end of Spanish occupation in 1898. Now it’s a cool place to play hide and seek or take nice photos. 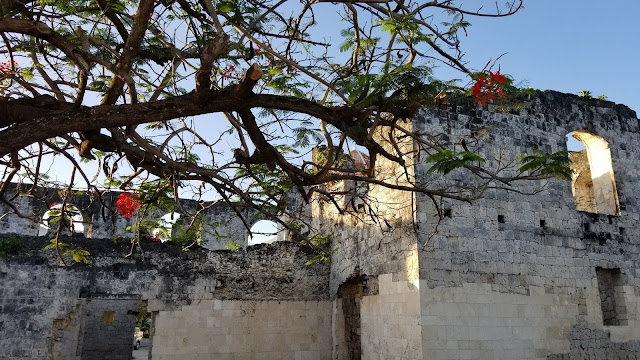 I love being able to explore ruins 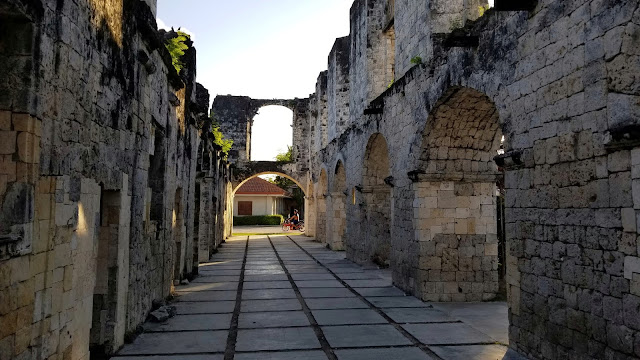 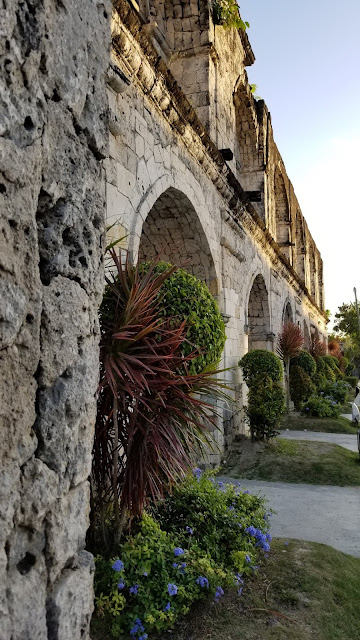 The Baluarte
Last but not least as it’s probably the most interesting historical piece in Oslob, is the baluarte ruins. Baluarte essentially means bulwark or bastion and has a main function as a small fort or point of defense. At one point, there were 74 baluartes built along the coastline of Cebu and were built to defend the small towns against pirates from neighboring islands. 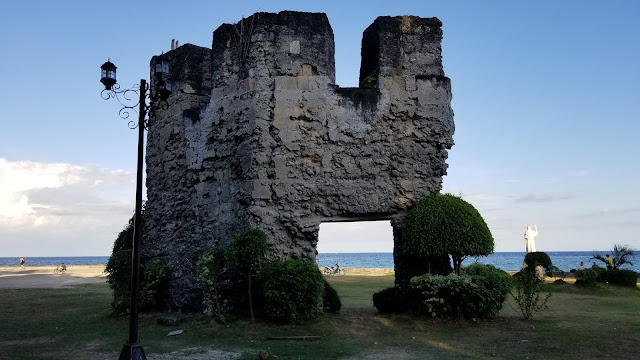 The backside of the Baluarte Now there are only 22 ruins remaining, 13 of which are in Oslob specifically. Most even still are located on private property but there are a couple you can see, with this one preserved in the Heritage park, being fairly easy to visit. This Baluarte was built in 1788 and has a success story in 1815 that caused the town to relocated to its current location. While again it’s mostly in ruins, I still recommend going to check it out, along with these other historical sites. All are located next to a beautiful park right on the coast. 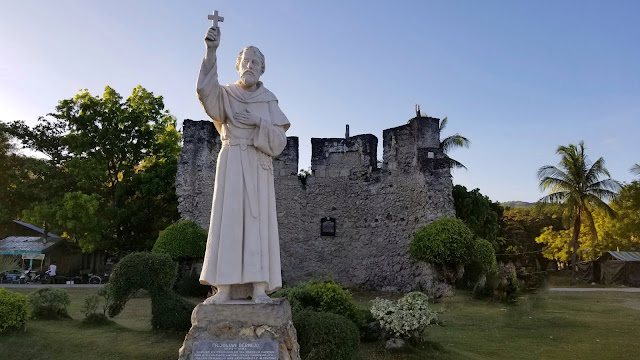 After our history lesson, we headed back to the street vendors for more bbq pork which we topped off with some drinks from the 7/11 and deserts from our favorite bakery. Then we headed back to our rocking chairs at the hotel to hang out and watch night time fisher men go out on their boats thus concluding a very relaxing day with a very pleasant evening. 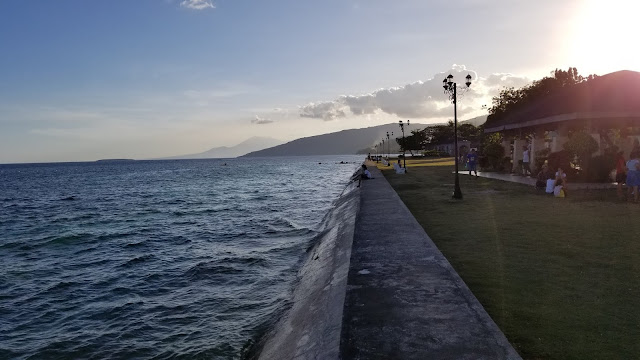 The beautiful park in the city center area 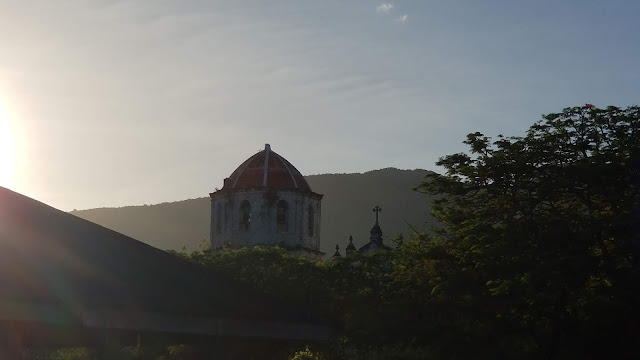 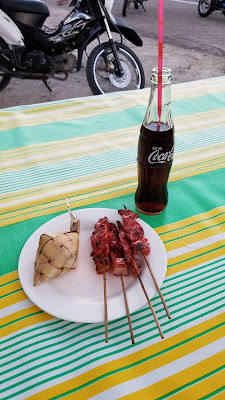 BBQ pork with coke again but this time added a thing of rice to try with it.